Bringing an organism back from the dead is a quirky topic that unites both science fiction lovers and conservation biologists. It’s a safe assumption that you, my faithful readers, have watched, or at least know the premise of Jurassic Park. The concept of bringing back animals that once roamed the earth millions of years ago captured the imagination of everyone who watched it. Ever since that movie came out, society has patiently waited for our own T. rex petting zoo — but scientists have continually disappointed us (I don’t know what the delay is, it seemed pretty easy in the movie). However, with the discovery of an extremely well preserved woolly mammoth carcass in the Siberian tundra, the concept of bringing animals back from the dead has been given new life. And with the possibility of reemergence, conservation biologists are looking to the past as a means of saving the forests of North America from a surprising pest.

It turns out that a particular species of ruminant has ballooned in population numbers, and the overabundance of this even-toed ungulate has detrimental consequences to crops and the sustainability of North American ecosystems on whole. If you couldn’t sieve through the science jargon, I’m talking about Bambi. That’s right, the cute white-tailed animal of Disney is throwing our ecosystems out of whack, and may even lead to a mass extinction event in the future. White-tailed deer are native to North America, and as such, enjoy eating native flora. However, since their populations are so large, herds of deer completely decimate grasslands and forests of their native plants, allowing non-native invasive species to enter and set up camp(1)(2). This is where the problem lies, and humans share part of the blame for this potential catastrophe.

At multiple times over the Pleistocene epoch (as far back as 640,000 years ago, and as recent as 13,000) mass extinctions took place wiping out 71% of large mammalian species in the Americas, Europe, Asia, and Australia. Environmentalist Tim Flannery stated in his book, The Eternal Frontier :

ever since the extinction of the megafauna 13,000 years ago, the continent has had a seriously unbalanced fauna(3).

The exact reason for this extinction event is not certain, however an emerging idea is the second-order predation hypothesis. In summary, it states that humans over-hunted predators (not herbivores), and this led to the overabundance of herbivore species that were now free to reproduce unchecked. As prey populations increased, their habitats were unable to support their increasing numbers as the herbivores incessantly browsed and grazed, this lead to mass death of the large mammals at every trophic level. This hypothesis has support from mathematical models that corroborate its validity(4)(5).

We notice some troubling similarities to the past in comparison to our current position. Human hunting of top-level predators that are perceived as threats cause their species numbers to drop, and the wolves and cougars that are untouched by humans live in fragmented forest habitats preventing them from suppressing herbivore populations(6), this then leads to the rampant overpopulation of deer and the destruction of native flora by this overabundance. This is an eerily similar situation to the one we got ourselves into tens of thousands of years ago.

So what are our solutions? Well, you may think that we can simply increase hunting efforts in order to cull the ruminant population. However, hunting isn’t the answer(7), and based on our track record for completely decimating populations when hunting/fishing is unregulated (collapse of cod fisheries ring any bells?), we would likely create an equally horrible situation where we end up with too few deer with little hope of recovering their numbers(8).

Scientists propose a different — and so much cooler — method of keeping deer populations regulated, our forests full of native plant life, and increasing biodiversity in the process. The plan is called Pleistocene rewilding, and it involves bringing the modern analogues of species that roamed the earth thousands of years ago back into their former habitat. And aside from filling the various ecological niches that were left vacant after the most recent extinction event(9), we would be able to have top predators introduced to help suppress our current deer problem.

So now we have our pick of the litter. There exist numerous ecological equivalents to the top predators of the past, and you may be surprised to learn what species used to roam the, not so ancient, lands of North America. We had a massive cat known as the America Lion, weighing up to 740lb and over 4ft tall at the shoulder(10) — its African cousin would make a perfect fit. An American Cheetah roamed the New World; related closer to pumas than cheetahs, it developed cheetah-like characteristics through convergent evolution(11). Scientists believe the existence of this cheetah helps explain why pronghorns are capable of running at nearly 90km/h — since this speed easily surpasses that of both wolves and cougars(12). Once again, the extant African species would be used to fill this ecological niche.

However, you may notice a problem with the animals I proposed to fill their ancient ecological roles above: they live in hot, arid savannahs — and Canada can get pretty chilly. This little problem puts a damper on which apex predators we can bring over to help control pest population. Though, there is one animal that thrives in winter environments, and it just happens to be the largest predatory cat available — the Siberian tiger. This massive beast already feeds on the various species of deer present in the northeastern forests of Asia, and its introduction into North America would aid in our current efforts to raise its poor population numbers. The Siberian tiger would fill the ecological role that was occupied by the American lion and Smilodon: the sabre-toothed cat. 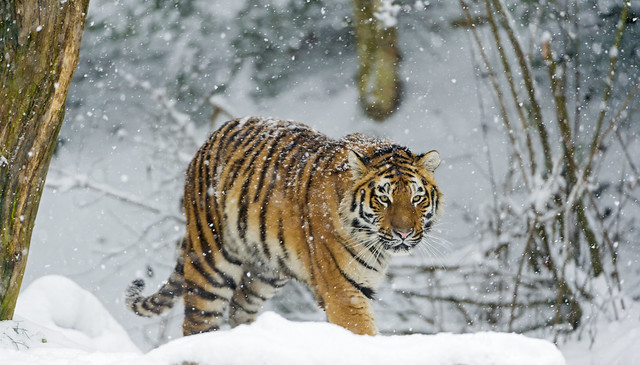 Great, it seems like we have a solution to a problem that would likely spell the demise of our North American ecosystems. Now we just need some public acceptance and we can fly these tigers over within the week… This is likely the largest hurdle to overcome. The knowledge that we would have numerous 600lb tigers roaming our forests would cause utter chaos among the general populous. Large-scale opposition was seen regarding the reintroduction of wolves into Yellowstone National Park (and would most certainly be present with tiger introduction). Ranchers completely opposed the idea, citing that wolves destroy livestock and are considered a plague on their way of life(13). However, the benefits of wolf reintroduction are staggering and have rectified the problem of elk overpopulation within Yellowstone, facilitating an increase in native floral biodiversity(14). While wolf reintroduction would take far longer in areas outside of national parks(6), and waiting for wolf population numbers to increase naturally could take decades — tiger introduction would be immediate and would confer numerous benefits (in ecosystem stability and by increasing tiger populations). But of course, this is wishful thinking and, as I’ve stated before, answers to difficult problems are never simple.

Earlier I spoke about Jurassic Park and alluded to the possibility of bringing back once extinct animals. This fantastical idea has reemerged in public discourse with a recent Vice news report detailing the finding of a woolly mammoth carcass in Siberia that has enough viable tissue to potentially clone the species(15)(16). This would enable us to enact Pleistocene rewilding using the actual animals from that time period. However, there are ethical dilemmas that arise with this sort of topic — I believe Dr. Ian Malcolm said it best:

Yeah, yeah, but your scientists were so preoccupied with whether or not they could that they didn't stop to think if they should. — Jeff Goldblum, Jurassic Park

That is, who is truly benefiting from reviving extinct animals? Is it the species that potentially gets another shot at evolutionary success? Or would humanity use this scientific triumph as a conduit for financial gain? Being engrossed in science all my life, I am unconditionally in favour for the progression of knowledge — and I feel like trying to bring back an extinct species to determine if the feat is possible is acceptable and noble. However, it’s what we do with the knowledge that “un-extinction” is possible that I am worried about. Like any science/animal lover, I would be ecstatic at the potential to have an island theme-park full of sabre-toothed cats, woolly mammoths, and dinosaurs. But if we don’t plan on creating a self-sustaining population of mammoth, the only animals that would be benefitting would be the humans.

In an earlier article, I detailed how the ignorant will, with good intentions, put forth easy solutions to problems completely out of their scope. Although I would like to say that the answer to deer overpopulation is as simple as airdropping some big cats into the Great White North, I understand that I’m oversimplifying things: public displeasure/fear would prevent swift approval, not to mention the potential that using tigers as a means of biological pest control could backfire and throw the food-web into disarray, as has happened numerous times in the recent past(17)(18). However, lowering the ruminant population is vitally necessary for the stability and sustainability of North American ecosystems, and predation seems to be the most viable option for realizing this solution. That is, until we can bring back Deinonychus and Smilodon (in self-sustaining populations), tigers will be our best bet. And I’m personally thrilled at the idea of being able to travel 5 hours north to see one of my favourite animals roaming free and in good numbers. Just don’t forget to bring your tiger spray.