With the recent release of Jurassic World and its record shattering box office numbers, dinosaurs are once again on the mind of the public. It’s easy to see why — dinosaurs represent an alien world that has actually existed. That’s what makes these creatures so cool and fascinating: we know that towering beasts with teeth longer than rulers actually walked the Earth at one point, and this allows us to anchor our thoughts in reality — but because we do not live alongside them, our imaginations are still able to run free when we picture amazing dinosaur battles and landscapes in our mind.

I figured that since dinosaurs are in the public eye once again, it would be a good opportunity to talk about, and hopefully put to rest, some of the more controversial and ongoing topics regarding the “terrible lizards”.

birds: the result of millions of years of evolution selecting for lighter dinosaurs that could better avoid prey, resulting in the most advance theropods to ever walk on Earth.

For starters, I may as well point out that although the word “dinosaur” means “terrible lizard”, it really is a misnomer. The whole “terrible” part is subjective, but the “lizard” portion to the name is completely misleading. I can tell you with some conviction that dinosaurs aren’t lizards — but trying to rank dinosaurs any further has been quite a mess for the last couple of decades. Scientists and taxonomists are working hard to place dinosaurs, crocodiles, and birds in their proper categories, but new research is always cropping up and causing the labourers to second guess their work. I’ve rewritten this section numerous times trying to make sure that I got the taxonomy correct, and sieving through a convoluted mess of information was one of the best headache providers I’ve encountered. But, without further ado, I give you a likely, most correct definition, for now, of what a dinosaur is (anticlimactic, I know).

Dinosaurs are considered diapsids, which means that they have specific holes on each side of their skull, and these are visible to us when we see them in museums. Diapsids are considered reptiles, just like crocodiles are. Thus, dinosaurs are reptiles — however, they don’t share in many of the same stereotypical traits that we normally associate to reptiles. That is, dinosaurs didn’t have sprawling limbs, nor were they cold blooded (they fell somewhere in-between warm and cold: called mesotherms). Birds are also diapsids, and are considered reptiles just like dinosaurs are; they, too, share in few of the characteristics we normally associate to the scaly reptiles. There, that wasn’t so bad.

Sue, the largest and oldest T. rex found. Note the characteristic diapsid holes in her skull.

With classification jargon out of the way, it’s time to tackle the sexiest of all dinosaur arguments: do they have feathers? And the answer is a resounding “yes”… sometimes.

There are five major groups of dinosaurs (I lied, more classification jargon coming): the sauropods, which contain the giant long necked dinosaurs like Brachiosaurus; the large grazers known as the ornithopods, which the crested Parasaurolophus is a part of; we have the group that the famous Tyrannosaurus belongs to, the theropods; there were the shield bearing thyreophorans that claim Stegosaurus; and the extremely difficult to pronounce marginocephalians, of which Triceratops belong to.

Only one of these groups has strong evidence for adorning feathers, and, thankfully, its the easiest group to pronounce, the theropods. Although there have been feather-like structures found in the other main groups of dinosaurs, only the species belonging to theropods have been shown to harbour the flight-feathers that we see in modern birds. These specific animals belong to what are known as the maniraptors, and contain all the raptors, therizinosaurs, and aves. That’s right, birds are dinosaurs — not merely descendants of them — actual dinosaurs. It makes geese seem all the more scary when they chase you down a hill (first hand experience) knowing that they have a thirst for blood in their genes… 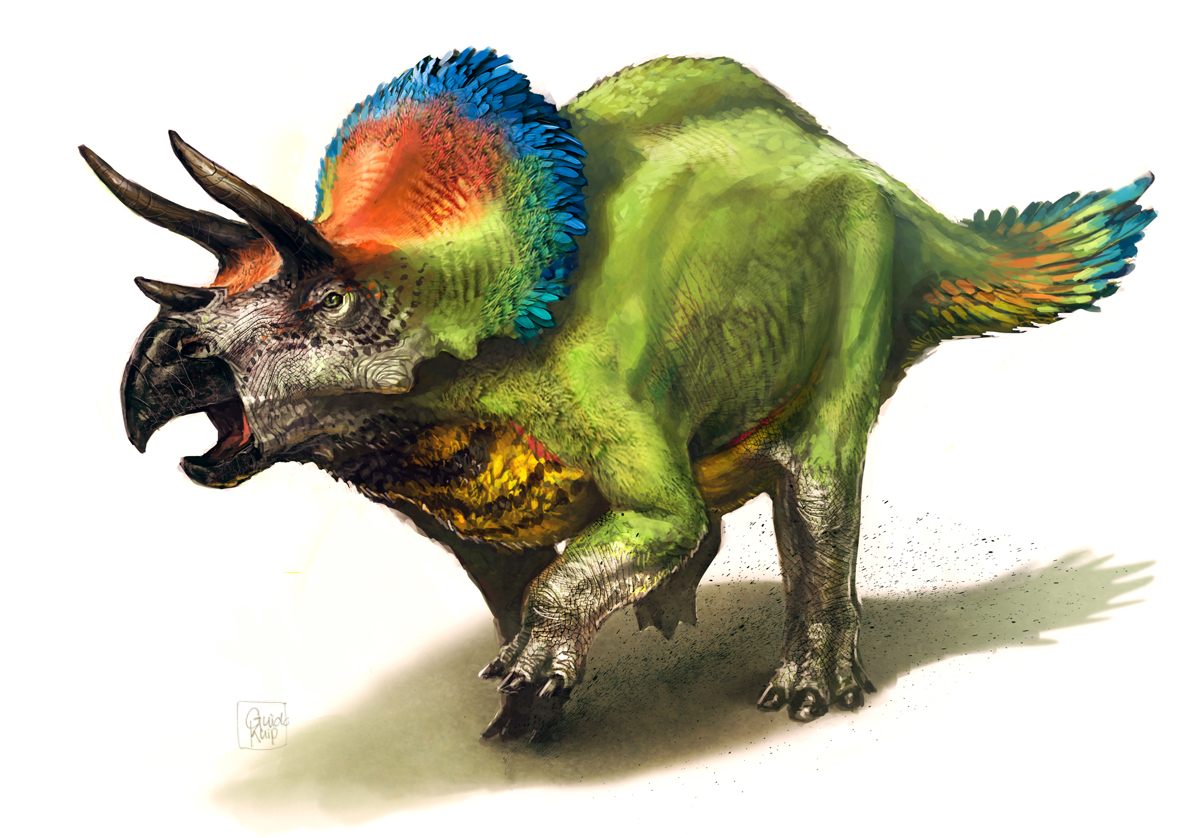 This is NOT how Triceratops looked. They did not have feathers. If an article depicts this animal in this way, run…

So now that we know that most theropods had feathers (whether T. rex had them or not is up for debate), and some even had flight-capable feathers — a good question to ask is: why? What was the purpose of these animals having feathers in the first place?

Let’s look to modern birds for help. When I picture feathers, the first images that comes into my mind are long and beautifully coloured plumages — and one modern bird stands out among the rest in regards to opulence: peafowl, specifically peacocks. The general scientific consensus is that the iridescent plumage of peacocks evolved through sexual selection — though the exact reason why is still up for debate. Maybe having such colourful feathers is an honest indicator of one’s health and means that you are extremely fit; perhaps peahens associate the blue eyespots of tail feathers to their favourite food source, blueberries; or maybe peahens just originally liked males that looked like they ran through a Crayola factory and decided to mate with them. Either way, the trait for wild feathers stuck and took off.

Bringing this back 100 million years, scientists believe that dinosaurs originally used feathers for much of the same reason — to get laid. Dinosaur feathers were likely innocuous traits that had no real “primary function” at the time, and, instead, were used more as a visual signal to other dinosaurs around them. However, all evolution needs is a trait to be selected upon, and once feathered-dinosaurs existed, the original trait had the possibility to attain many uses down the road.

It’s important to point out, though, that evolution has no foresight. It doesn’t see a primitive trait and think “oh cool, I can make these animals fly now” — evolution just occurs through the non-random selection of random mutations, that’s it.

So, what was the next big step for feathered dinosaurs? Well, earlier I talked about how it was the theropod dinosaurs who had the feathers, and if you are a dino-buff, you know that raptors are theropods. Our most fantastical depictions of raptors have them jumping on large prey and slashing at them with their huge claws — and this is where we think the feathers came into play. You’ll notice that raptors were bipedal, this would make it difficult to maintain one’s balance while they slashed at the prey the stood atop — akin to you standing on a moving horse. Scientist have put forth evidence that raptors used their feathered arms for stability while holding on and attacking prey with their feet: using flapping motions to stay vertical. This idea is pivotal in the development of feathers and the origins of the flapping motion, and this brings us to our final point of discussion: how the development of flight occurred and how we got to birds.

There are a handful of hypotheses stated as to how flight fully developed. One such idea is the cursorial, or “ground up”, model. This idea puts forth the notion that birds started out on the ground and used flapping as a means of stability. However, it is an extension of this cursorial model that really has me interested. It’s called the wing-assisted incline running theory — and posits that light flapping enabled dinosaurs (and modern birds) to run up extremely steep inclines as a method of escaping predators, climbing, or hunting.

We don’t even need to travel back 100 million years to see this in action. Modern birds, as they develop from chick to adult, actively exhibit each stage of flight evolution detailed by the cursorial and the wing-assisted incline running theory as they transition towards fully flighted adults. In watching the development of a hatchling to an adult, we’re pretty much looking at hundreds of millions of years of flight evolution sped up to a few months’ time.

Standing over 6ft tall, this cassowary would totally love to go raptor on you. Just look at those soulless eyes…

The way I see it, theropod dinosaurs originally had feathers as a means of display for mating purposes. As sexual selection takes hold, feather adornment increases in its outlandishness, leading to the development of long feathers on the forearms of certain dinosaurs. Raptors then co-opted this physical adaptation to aid them in hunting and maintaining their balance by flapping their arms for stability. This was then taken a step further as dinosaurs used this flapping technique to run up steep inclines. Eventually, this led to the development of flight after thousands of successive generations of lighter dinosaurs being able to run up steeper and steeper inclines — until the ones who could generate lift began to survive the most.

And this brings us to birds: the result of millions of years of evolution selecting for lighter dinosaurs that could better avoid prey, resulting in the most advance theropods to ever walk on Earth.

Oh, and I feel like I should mention, much like my prior article regarding bringing back ancient species from the Pleistocene epoch, we’re trying to do the same with dinosaurs, too. Only, instead of using frozen animals, we’re genetically retrofitting modern birds. It may not be that long until we have a real Jurassic Park of our own — but this is a topic for another article.

So, the next time you come across a shady looking bird, just remember that it likely has millions of years of flesh eating terror imprinted in its genome and would likely jump at the chance to attack you. At least, that’s how I rationalize the thought process of menacing Canada Geese.